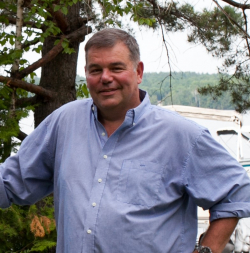 Jeff, 56, grew up in Cornville and Skowhegan. He worked his way through high school at McDonald's and on local farms. Sports were always important to Jeff. He was inducted in to the Skowhegan Football Hall of Fame as one of the members of the State Champion teams of 1977 and 1978.

At 29, Jeff started his first company, called GWA and that kicked off his entrepreneurial career. GWA filled a gap in behavioral health services for adolescents and young adults in Maine. After donating GWA to a nonprofit organization, Jeff started Exchange International. Exchange International was a multinational company that supported the exchange of University and College facility between institutions in the United States and Europe. Additionally, it facilitated the exchange of professionals from four continents to improve the behavioral health model in the United States and abroad. Jeff sold Exchange International in 2011. Currently Jeff is the Executive Director of the Children’s Center. The Children’s Center provides services to children under the age of 6 with developmental and intellectual disabilities and supports to their families. In his time at the Children's Center, he has greatly expanded the program's reach to include locations in Skowhegan, Farmington, and Gardiner as well as the original Augusta location.

Jeff lives in Norridgewock. He is married to Heather Finnemore Johnson and has four children, two dogs and, begrudgingly, a cat.

Low unemployment doesn’t mean we have a good economy. Our downtowns don’t look like they did when I was growing up. We all know it. Rural Maine is being left behind and yet our area has so much potential, so much opportunity in front of us! I’ve been a business owner in Central Maine for 30 years creating and sustaining hundreds of jobs here. Enough talk. Enough waiting. I’ll make real business development happen.

Working class seniors are getting a bad deal. We’re not being fair. Hard working retirees at a time when they should be receiving the benefits of decades of hard work are struggling to pay their bills, buy prescriptions, living in fear of losing their homes. They deserve better from us. Maine agencies, primarily DHHS, Department of Education and Medicaid are too big and inefficient. I’ll bring business sense to their bureaucracy. Millions of dollars can be saved without reducing the quality of services of those departments, bringing real property tax relief. Believe it. Those savings are there and help can come to our seniors.

We pay for it. We hope for it. But we don’t get it. Maine’s budget for 2018 is $7.7billion. About $5billion of that is spent in Department of Education, Department of Health and Human Services and Medicaid. After doing business with each of those departments over the past 30 years I can tell you there is waste and mismanagement that floors me. As a small business owner if I had such disregard for what I pay for and the outcomes I get I would go out of business over and over again. Ask someone you know that’s worked for any length of time in one of these departments – ask them how much waste they see. It makes me angry and I’m guessing you are too.